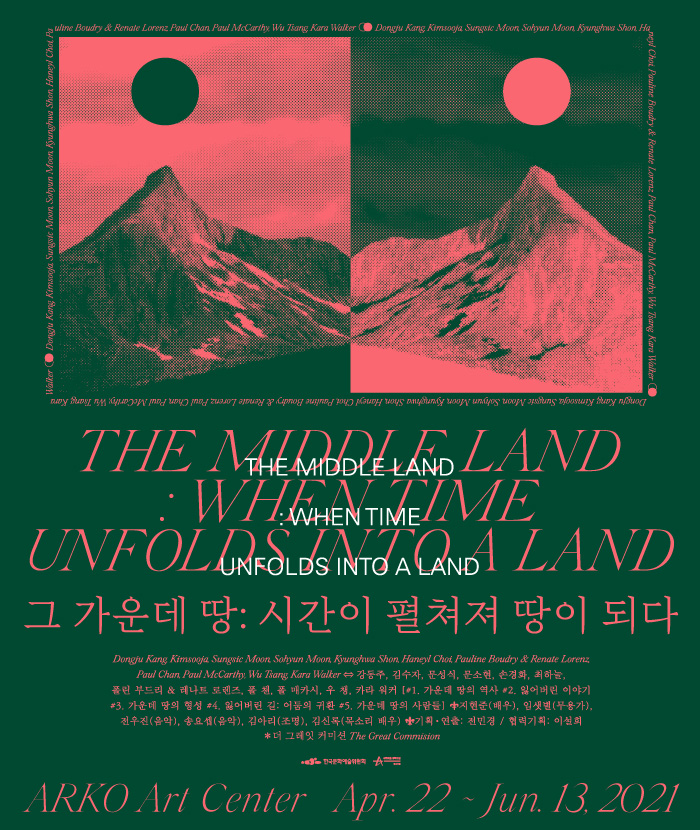 The Middle Land: When Time Unfolds into Land

The Middle Land: When Time Unfolds into Land presents five narratives that formatively interpret the multi-dimensional nature of time and space. Based on the concept that regionality reflects reality, the exhibition portrays a series of psychogeographic maps. These maps are presented through psychological, mental, and spiritual narratives that implicate characters and historical events.

As this year’s Selected Exhibition for Visual Arts by Arts Council Korea (ARKO), the performance exhibition puts forth the notion of play as contemporary art. The Middle Land introduces an adventurous epic art exhibition that personifies each artwork by topic and presents them through a theatrical production.

The exhibition’s title was derived from “Middle-Earth” as mentioned in the first work of J.R.R. Tolkien, who was a master of fantasy literature and a linguist. It is a concept that represents Tolkien's literary worldview that spanned for more than half a century: seeking the meaning of a land’s space, place, and region and ultimately interpreting a complex life story comprised of good and evil.

Combining exhibitions and performances into a single production, The Middle Land presents a stage for imagination that reflects our world but transcends our time. The exhibition personifies formative artworks with a creative worldview.

Kyunghwa Shon conceptually engages with psychogeographic maps emerging from the metropolis, environment, and space. This series of maps, which project emotions, cultural customs, and history through planar, solid, and installation works, suggest both an abstract landscape reflecting contemporary times and an empirical landscape that induces the audience’s sensory experiences.

Sungsic Moon’s drawings and paintings depict the scenery and subtle instinctual elements of life. In this exhibition, Moon makes a hybrid visualization of the imagined and real scenery drawing from Dream of Strolling in a Peach Garden, which was painted when Prince Anpyeong told An Gyeon about his dream of Utopia Peach Garden, and a new oil painting, which was inspired from Storm Lifting Over Inwang Mountain by Jeong Seon.

Haneyl Choi practices formative experiments through social issues and art history. In this exhibition, Choi presents a three-dimensional, hybrid genre structure that embodies the view of personified sculpture in a space-specific manner.

Kimsooja introduces existential questions on the trajectory of life through reflection and reason in performance, video, and object installation. In this exhibition, Kim invokes the forgotten names of individuals in history. She recalls these marginalized characters and brings forward relevant social, political, and personal topics

Kara Walker illustrates the injustice, discrimination, and violences behind historical narratives of race, gender, sexuality. In this exhibition, Walker exposes aspects of historical events from Genesis to the modern era, especially the history of enslaved people sacrificed during the industrialization period, introducing the problematic and racist attitudes and perceptions of the time.

Sohyun Moon exposes the contradictory structures of society and seeks out the sources of reality, anxiety, and desire from which it derives. Moon expresses incomplete and primitive emotions using spatial and media narratives.The works mainly combine image mapping, stop motion animation, and drawing in order to track complex mental images and the hidden entities they represent.

Wu Tsang is a filmmaker, installation artist, activist, and performer who works in diverse fields and genres. The participating works of this exhibition deal with hidden histories, the resulting stereotypes in the modern mind, and the awareness of the evils of implicit enlightenment.

Paul McCarthy subverts the system of private ownership through works that contest norms of clichéd expression and behavior against taboos. His works are interested in how universal myths have shaped modern society. In this exhibition, the artist’s performance video work, which is expressed in a rather provocative, bizarre, and aggressive fashion, unconventionally criticizes institutional art.

Pauline Boudry & Renate Lorenz are an artist duo who collaborate with choreographers, artists, and musicians. Through an experimental format of performance, they re-edit history as it has been written according to a normative timeline. Telepathic improvisation in Act 5 presents a personal projection of objects and suggests the future of multi-dimensional beings.

Paul Chan focuses on the geopolitics of globalization, covering a wide range of topics such as political situations, languages, and media. Chan introduces an installation work that reproduces Polyphemos, the one-eyed giant son who appears in the Greek comedy Odyssey. Polyphemos, which means “rich in songs and legends,” reminds us of who may exist in the middle land.

Dongju Kang observes the urban landscape and records these observed movements in drawings and prints. Kang’s participating work introduces spatial relationships derived within the flow of time. The work allows timing and environmental factors to experience an organic sense of change.

The Middle Land originated from British fantasy master J.R.R. Tolkien’s first of a total of twelve epic poems published in his lifetime, collectively titled “Silmarillion.” The work is the predecessor of the world renowned Lord of the Rings series. Tolkien's unfinished work was published posthumously and a wide range of interpretations have subsequently been made.

As Tolkien has said in a letter to his readers written before working on the manuscript, although the narrative of middle-earth may seem like a great hero's biography, its grandeur means nothing without the trivial and the ordinary. He wanted to emphasize “the preciousness of a peaceful and uninteresting life.”

Through a complex and multi-level spatio-temporal production about the values of life’s essentials,The Middle Land asks the audience, “what is the story of the moment?”. The hope is to record a “small history” of incomplete stories that sail to different points of completion.

Hyunjun Ji is an actor with a diverse spectrum of work that traverses media and drama. Starting out as a stage actor, Ji has been familiar with stage plays while active at the Trust Dance Company. His main works include I am my own wife, La Divina Commedia, and Jesus Christ Superstar. He appeared in the TV drama Hyena and the film The Man Standing Next, among other works. He won the Korea Theater Awards (2013), and Dong-A Theatre Awards (2014).

Setbyeol Lim is a dancer, and choreographer who engages with social issues, the environment, and the exploration of inner psychology through his work. Lim is a member of the LDP Dance Company and worked at the Akram Khan Company in the UK. Lim has appeared and received attention on M.net Dancing 9. Major choreography works include STEP UP ‘HELLO, THERE.’ Lim won the award at the MASDANZA Contemporary Dance Competition in Spain.

Woochi is an electronic music composer who deals with soundscapes and interactive audiovisuals. He is mainly characterized by his ambient and improvisational works of experimental music, including album CLOUDY invited to the 2020 New York City Electronic Music Festival and participation as a music director for seven short films, including STAY which premiered at the 2020 Houston International Film Festival.

SEP is a singer-songwriter who specializes in soulful melodies based on the chillhop, lo-fi genre. He is particularly exemplar in keyboard and other improv works in the soul-based jazz, gospel, and blues genres. His major works include The Journey of Eternity, Triangular Zone, and he ran to, and sound directing for Meta Studio’s Lost in Korea. His EP albums include Will You Be Happy and Mother.

Ari Kim is a lighting designer who has implemented a non-material sensory scenography and explores the language system through light. Kim has an excellent understanding of theaters as well as idle and experimental spaces. Kim worked as a lighting director of performance exhibitions The Journey of Eternity and Triangular Zone and the musical Gran.

Shin-rock Kim is an actress and performer to participate in theater art as well as an experimental performance. She has been starred a vivid character in various media. Her main works include ‘Critic’, Walking Holiday’, ‘and Mouthpiece’. The list of filmography is ‘Burning’, ‘Purpose of Love’ and ‘Method’ currently on TV drama ‘Monster’.

(subject to change based on COVID restrictions)

Performance Schedule (Tickets open on every Tuesday of performance week)