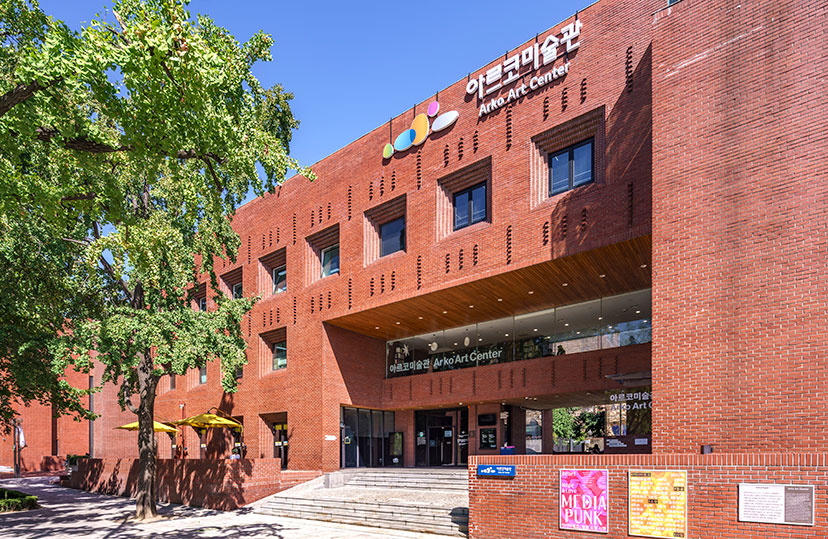 ARKO Art Center is a public art museum affiliated to Arts Council Korea. It was founded in 1974 as Misulhoegwan to provide artists and arts collectives with much needed exhibition space at a time when there was a paucity of such spaces in the country. In 1979 Misulhoegwan moved its premises from the former Deoksu Hospital building in Gwanhundong, Jongro to its present building, designed by the country’s preeminent architect Kim Swoo-geun (1931–1986) and located in Marronnier Park, the former site of Seoul National University. The two neighboring landmark brick buildings housing ARKO Art Center and ARKO Arts Theater have come to represent the district of Daehakro.

As public and private museums and commercial galleries increased in the 1990s, the center gradually shifted to curating and exhibiting its own shows. An annex space, Insa Art Space, was inaugurated in 2000 for the purposes of supporting promising emerging artists and alternative art spaces. These efforts at restructuring and specialization culminated in Misulhoegwan being renamed Marronnier Art Center in 2002, signaling a shift to a full-fledged art museum system and to the center’s increasingly prominent role as a public arts organization setting the contemporary art paradigm. When the Korea Culture and Arts Foundation was reborn as the public-private partnership organization Arts Council Korea, Marronnier Art Center became ARKO Art Center. Currently, the center holds exhibitions and education programs throughout the year in keeping with its role as a creative hub for contemporary visual art and an innovative and international community space for visual culture.

Following Arts Council Korea’s Vision 2030, ARKO Art Center is committed to becoming an active partner and collaborator in the creative practice of art, and to upholding the Council’s mission to enrich lives and extend to the general public the joy of creative practice through its support of arts and culture. ARKO Art Center’s programming reflects these three goals: respect for creativity and diversity, social expansion of artistic and cultural values, and autonomous and collaborative operation.

ARKO Art Center’s exhibition and education program is committed to respecting cultural diversity and supports innovative and experimental works that blur the boundaries of genre and media. Contextualizing topics and social issues directly related to the future of humanity and communicating these through art practice is a necessary social role for any public art museum and cultural organization. Continuing its forty-five year history of cultivating leading artists and curators into 2020, ARKO Art Center is dedicated to remaining an intermediary space where the arts community and society, artists and the public converge.