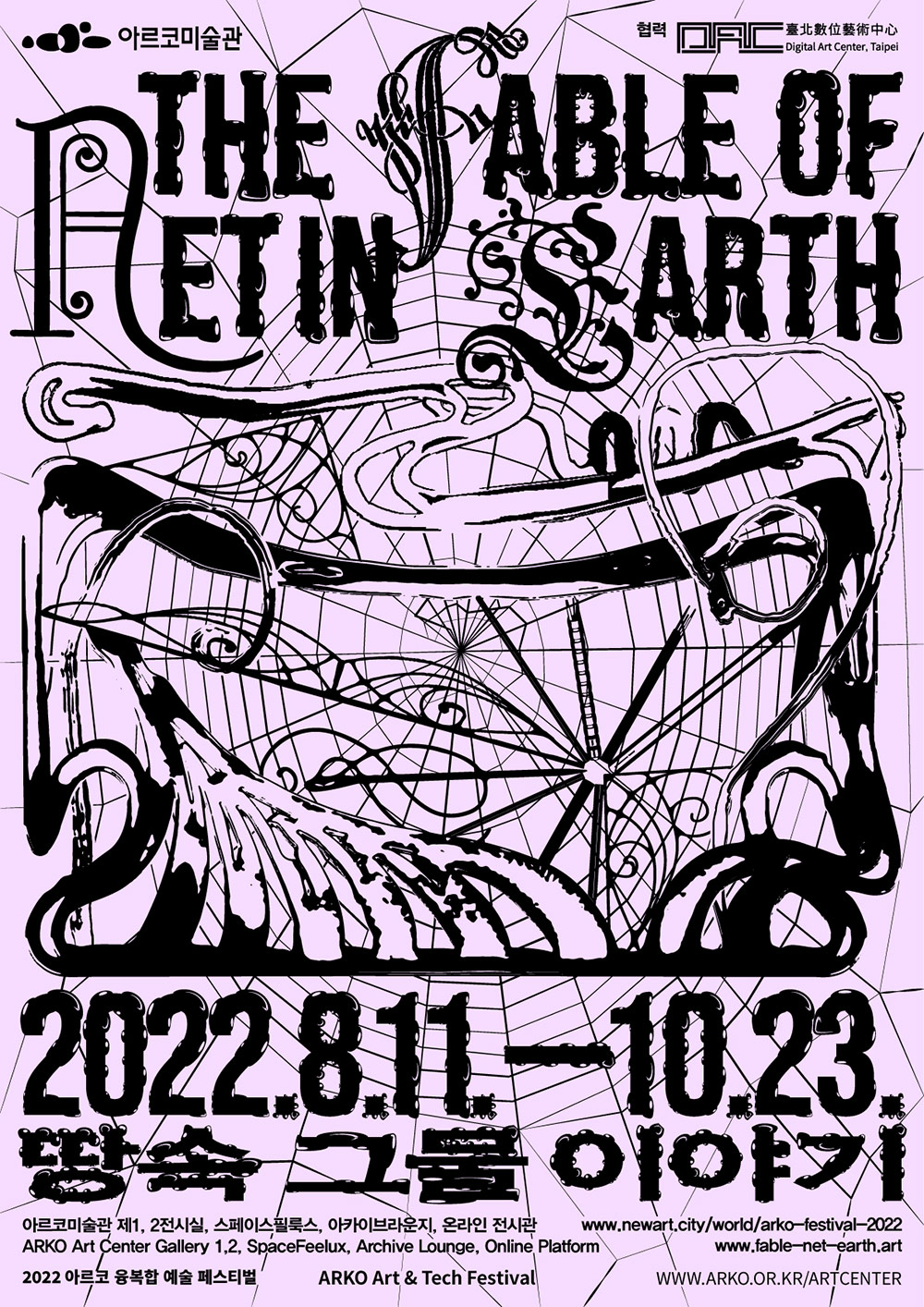 2022 ARKO Art & Tech Festival The Fable of Net in Earth

2022 ARKO Art & Tech Festival The Fable of Net in Earth is an exhibition that examines shifts in digital networks and conditions of art production in a cumulatively accelerating hyper-connected society, exploring how this drift continues beyond speculative stories to practices in the real world. Instead of embodying the fantasy of connecting the virtual world to reality with digital-based technologies such as augmented reality and interaction, it focuses on how speculative or imaginary stories are led to knowledge and practices, creating Earth-shaking changes. The Fable of Net in Earth metaphorizes a decentralized network system of Web 3.0 by likening it to the system of fungal clusters, such as mushrooms and molds. It also addresses the unrevealed entanglement of humanity, nature, and mythological beings as beings of earth and concentrates on the story of ‘worlding’ that they portray.1)

This story starts with a suggestion to view the present and future life in a new scope, deviating from the order that the knowledge system of this era has given. Aiming towards ‘disenchantment of the world,’ the knowledge system of today alleviates the confusion caused by the hybridization of humans and non-human beings and separates the realms of the sacred and the profane, civilization and non-civilization, soul and living. However, this festival presents a magical world in which all beings of earth are intertwined through the ‘re-enchantment of the world’ that creates bonds between the life and knowledge of non-human beings, such as animals, spirits, and myths, which have been disconnected by anthropocentric, scientific, and rational conceptions.

The Fables of Net in Earth supposes the exhibition space of ARKO Art Center and the online virtual exhibition space as a platform where a storytelling tool that has stepped out from normality and order is activated through digital creations to create a new story. In Gallery 1, The Unknown and Wildness allows the audience to experience multi-layered cosmology in different time zones with long-standing narratives on the coexistence of mythology, spirits, and wildness (Clara Jo, Mooni Perry, Morehshin Allahyari, Natasha Tontey, Youngjoo Lee). In Gallery 2, Mutant World introduces a speculative world where a decentralized and distributed network of Web 3.0 is formed in the digital world (eobchae, Keiken, Song Min Jung, Sunjeong Hwang, Sunpil Don). The Underground Garden in SpaceFeelux is where HONF’s work as well as many programs that share the knowledge and practices of collectives and communities that resemble the energy of earth can be found.

Meanwhile, the online virtual space Mycelium Garden invites the audience to explore digital works as if they’ve become microscopic spores, in the micro-fictional world organized according to the growth phases of fungus. In addition to the artworks by eleven artists in the physical exhibition space, the audience will be able to encounter commissioned and collaborative works by the artists with three guest curators (Anna Kim, Vishal Kumaraswamy × Ritika Biswas, Clara Jo × Mara-Johanna Kölmel, Li Yi-Fan × CHEN Hsiang-Wen). Moreover, the audience can find the phrases and writings written by four writers Bora Lee-Kil, Bosun, Hannah Seo, and Mina Ha based on the output of the festival’s pre-exhibition workshop Worlding-with, where they discussed real-life changing stories and potentials of practices, in electric signals in Mycelium Garden. Stories of the virtual space can also be found in the viewing room in the ARKO Archive Lounge on the second floor. The festival is preparing for another online exhibition and screenings in Mycelium Garden in collaboration with Digital Art Festival, Taipei, which will be released on September 30 during the festival.

Existences under earth that create a hybrid world with multiple perspectives are ‘compost’ beings2) which live and die in conjunction with various creatures on Earth. The world depicted through the scope of mutants and hybrid beings is filled with the energy of recovery, reconstruction, and creation of future generations. It is the power of mutants and the vitality of earth that makes it possible to grow new seeds on the wasted land. We invite you to stay together in the mutant world with underground beings in earth.

1) The Fables of Net in Earth shares the wisdom of Nausicaä, a mediator from Nausicaä of the Valley of the Wind (1984), who connects the mutants of the fungal forest and the human community to coexist. It also refers to the ecological cycles of the imaginary world in which contaminated fungal forests prepare for regeneration and circulation in deep earth.

2) According to Donna Haraway, ‘compost’ is a configuration of de-anthropocentrism and a concrete shape that life and death of multispecies are intertwined in mutual interdependence. Donna Haraway, Staying with the Trouble, translated by Yumi Choi (Seoul: Manongi, 2021), 13.